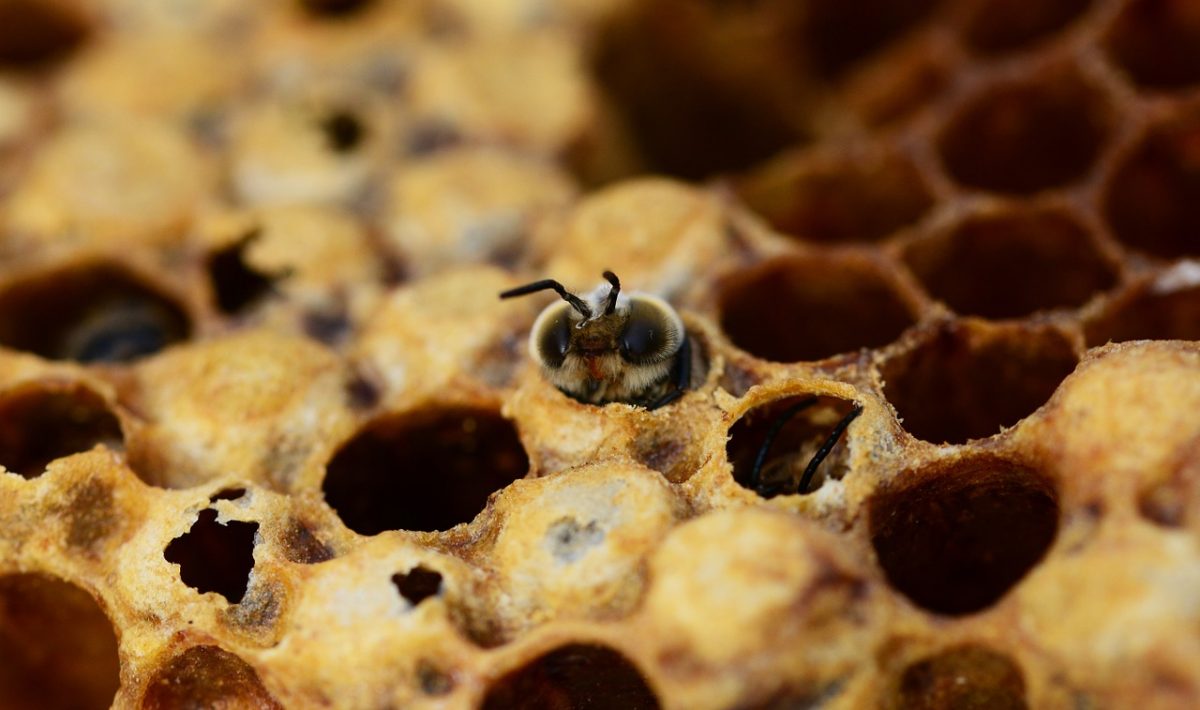 If you are learning about beekeeping you will notice the word brood used often.  And if you are new to the world of beekeeping brood is probably an unfamiliar term to you.  So, what is brood in beekeeping?

In beekeeping the word brood refers to the eggs, larvae, and pupae of the bees.  They reside in the brood chamber, which is usually the bottom boxes of the hive.

Frames in which brood are developing are called brood frames.  These frames contain brood in various stages of development, as well as some pollen and nectar in the upper corners.  It is important for beekeepers to be able to identify brood patterns, as it is an indicator of a healthy colony.

Life Cycle of a Honey Bee

The life cycle of the bee starts with a tiny egg.  Queen bees lay up to 2,000 eggs per day in the brood chamber.  After a thorough inspection of the cell, she lays one egg, which resembles a tiny grain of rice, in each cell.  Fertilized eggs become worker bees, while unfertilized eggs become drones.

Queens typically have a pattern in which they lay their eggs in the brood frame.  In 3 days the egg hatches and becomes a larva.

Bee larva (or larvae for the plural form) looks like a small, white grubs.  At first the larvae are fed royal jelly by the worker bees, before they switch to a diet of honey and pollen.  That is, with the exception of the future queen bee. Queens eat only royal jelly for their entire lives.

After 5 days of eating (and a lot of growth) the cell gets capped off with wax and the larva becomes a cocoon.  Amazingly, within just five days, they are 1,570 times larger than their original size. The larval stage lasts about 6 days.

Now, in the pupa stage, a transformation begins.  Over the course of 7 – 14 days, eyes, legs, and wings develop, until it finally looks like an adult bee.  During development the pupa’s eyes change color – from pink, to purple, and finally black. The last thing to form are the tiny hairs that cover the bee’s body.

Now, fully formed, the bee chews it’s way through the wax capping and leaves the cell.  The length of the pupa stage varies, depending on the type of bee. It’s shortest for the queen, longer for worker bees, and longest for drones.

Egg laying starts in the bottom box (brood box), on top of the bottom board.  When inspecting your frames, you may start to notice a pattern. This is because the queen moves around the hive in a circular motion, starting in the center.  As she moves around, she lays an egg in each cell. Therefore, each section of the brood frame will be in a different stage of development.

Brood is easiest to see when it is capped with wax.  The frames in the center of the brood box will have the most brood, as it is easier for the bees to keep them warm that way. The colony depends on a steady stream of new worker bees to support it, so most cells are worker cells. Drone cells account for about 20% of cells.  These cells are larger and have a darker cap that bulges out.

While the queen will lay eggs in clusters, it is normal to have a few open cells.  These cells are used by heater bees to warm the brood. Heater bees do this by using rapid muscle contractions.  Once their bodies are warmed they climb into an empty cell for about 30 minutes.  This effectively distributes heat to the developing pupae.

One of your jobs as a beekeeper is to identify a good brood pattern.  Reading a brood frame takes skill and practice. You are looking for signs that your colony has a queen, the brood is healthy, and whether the colony is expanding, stable, or decreasing.

You can tell your colony has a queen if you see eggs.  Eggs in a normal position signify that a queen has been there in the last 3 days.  You also must inspect the capped brood. Evaluate the brood pattern and check to see that the capped cells look normal.

While viewing the larvae, check the color and shape.  Keep an eye out for off color or twisted larvae. Often times if you see a spotty brood pattern you will also find unhealthy larvae.  It is important to inspect brood because if your colony has a disease or mite damage you want to catch it early.

There is an ideal ratio of bees to brood.  That ratio is 1:2:4. That means for every 1 egg there should be 2 larvae and 4 times the number of capped cells.

Bee colonies sometimes create queen cells (also called queen cups).  These are easy to identify because they are much larger than the other cells and resemble the shape of a peanut. There are a few reasons why queen cells are built.

Sometimes bees build queen cups for no apparent reason and they go unused.  But other times queen cells are made in order to raise a new queen. They do this when the existing queen is unable to produce enough brood or has died. In this case, the bees must produce a new queen to lay more eggs.  This is called a supersedure cell. Several supersedure cells are usually made at one time, with the first one to emerge becoming the new queen.

Bees will also create queen cells when the colony has grown too large for the hive.  In this case, half of the bees will leave the hive with the existing queen to find a new home.  This is called a swarm cell.