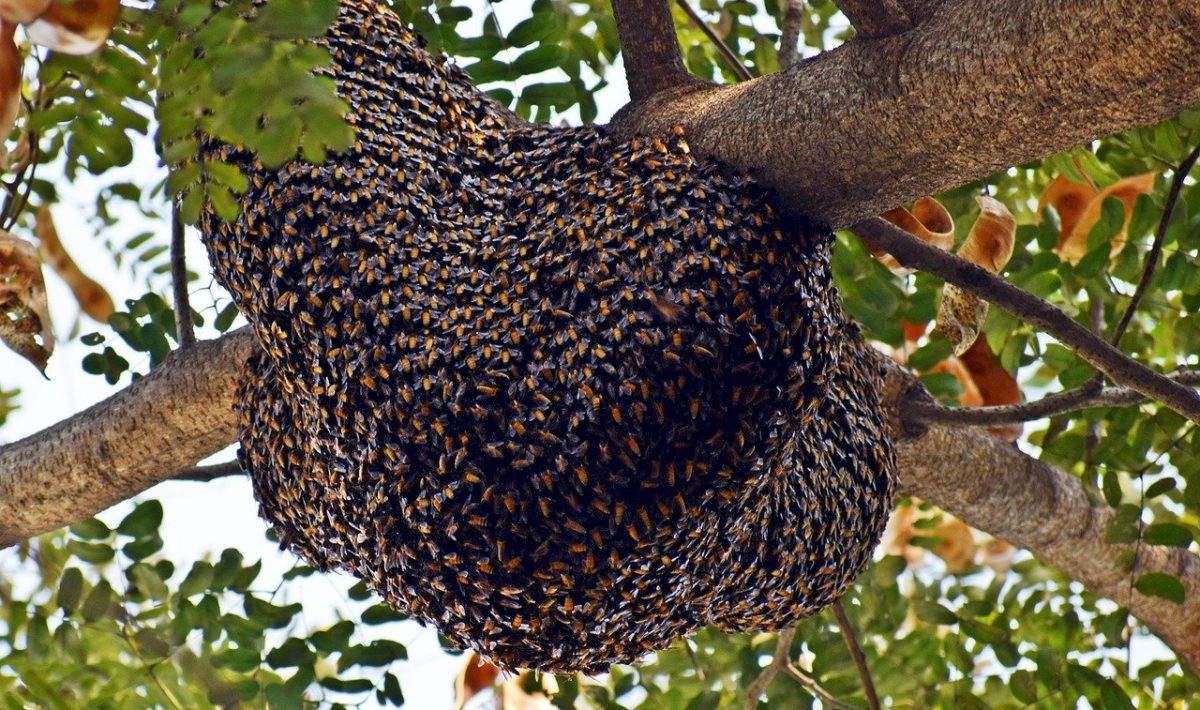 In beekeeping, swarming occurs when a single colony splits into two colonies.  This normally happens during the spring, but occasionally bees will swarm during other seasons.  When the colony starts to get too large, the existing queen and half of the bees will leave to find another home.

This phenomenon allows the colony to reproduce.  It’s something the colony does to survive and thrive.  Both the original colony and the swarm colony will have their own queens, so in the end, more bees will be made.

Once the hive starts getting crowded, the colony will make the decision to swarm. They will prepare for this by feeding the current queen less.  This will make her lose weight and have an easier time flying.

Meanwhile, worker bees will create queen cups and the queen will lay eggs in them.  Worker bees will feed these possible future queens large amounts of royal jelly. The hive may swarm as soon as the queen cells are capped.

At this point, the existing queen and up to 60% of the colony will leave the hive.  But where do they go? First they will move to a temporary location. Right now, the queen isn’t the best flyer, so this temporary location will likely be nearby the old hive.

Now scout bees will go off to check out new areas to live.  The scout bees return and actually vote on where the final location should be.  They do a waggle dance, which shows the other bees how to get to the location.  If they really like the site they’ll do the dance many times. Other scouts will then go to look at it as well.  If those scouts like the location they’ll repeat the waggle dance, getting more bees interested.

Once the final location is decided, the colony all together leaves to their new home.  This may be in a tree, shrub, or abandoned building. This group of bees is called the prime swarm. Worker bees guide the queen to their new location and quickly begin to build honeycomb and find and store food.  The queen lays eggs and brood rearing begins.

At the Old Hive

So now, what’s happening at the old hive?  The bees that stayed behind continue to forage for food and resources.  They plan to raise new bees to rebuild the colony’s numbers.

Soon, the first queen will emerge from her queen cup.  She finds, and then kills any other queens that have not yet surfaced.  Now she is the new queen of the colony.

Bees swarm when they need more space.  A healthy colony can grow quite quickly, and this causes overcrowding.  An overcrowded hive means that the bees will have less access to resources, and as a result the entire health of the colony will decline.  When this happens, the bees know it’s time to go and find a new home.

Bees also swarm as a means to reproduce.  Honey bees are social insects.  You can think of the entire bee colony as one organism.  Just like the queen must reproduce, so must the colony. And the colony achieves this through swarming.

This natural event results in two separate colonies, both with their own queens.  Now there will be twice as many eggs being laid and brood being cared for.

People who are not used to being around bees will certainly be startled by, or be afraid of a swarm.  But are swarms dangerous? The answer is no! Remember, bees only attack to protect their home. But swarms have no home, brood, or food to protect.

That means that swarming bees are quite docile and safe to be around.  As long as the bees have not started making comb, experienced beekeepers can easily capture the swarm and move them to a new location.

For beekeepers, catching a swarm is an opportunity for free bees. A lot goes into catching a swarm, and I recommend reading this article before attempting to catch a swarm of bees.  Basically, you must transfer the swarm into a large container.  Boxes, buckets, and nucs work well for this.

How to Prevent Bees From Swarming

While swarming is a natural thing for bees to do, it’s not necessarily something beekeepers want to happen.  No beekeeper wants to lose half of their colony. So what can beekeepers do to prevent bees from swarming?

First, they must be aware of the signs of swarming. A rapidly expanding colony with large stores of honey is often the first sign that a colony will soon swarm.  At this point, the beekeeper should carefully monitor the bees to see if queen cups are being used.

To prevent swarming, you can add more supers to your hive to create more space.  You can also use a top entrance, that way foragers will not need to crowd the brood box.  Some beekeepers opt to remove queen cups to stop swarming.

Another method beekeepers use to prevent swarming is to create a split. A split is basically a man made swarm.  Like a natural swarm, when splitting a hive you end up with 2 separate colonies. And this way you won’t have to worry about half your colony flying away.  With a split you move half the bees into another one of your hives.

A swarm is the natural process for a bee colony to reproduce.  During a swarm, the queen and half the colony will fly away to find a new home.  A new queen will be born at the existing hive.